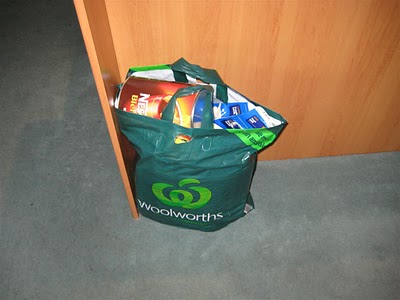 Annika and I have arrived into Darwin on a bit of a tour.  I knew that the Northern Territory had a ban on single use plastic bags but when we went shopping today in Woolworths, it hit home.  You see they have a very simple system.  They have heavy duty plastic bags that can be used time and time again.  If you want one it will cost you 15cents though.

In our very short time at the check outs, so many people had their own bags and I guess this is because they don’t want to pay for bags.  It was perfect and you can imagine how many bags they are saving that could potentially end up in the environment and harming our wildlife.

So it begs the question, if it works so successfully here in the Northern Territory and I’m guessing the same happens in South Australia and Tasmania, then why isn’t this happening Australia-wide? Woolworths and Coles have had to produce these bags that they then sell for 15 cents.  I bet you that they cost less than this so they are actually making a profit.  In other states they give away bags that cost them 2 cents a piece and hence costing them money.  I’m no accounting genius but even I can see that if you stop giving away items that cost you money and start selling items you make a profit on, then you will end up better off financially.

So what’s stopping them?  The perceived notion that people will stop buying at their stores if they can’t get free plastic bags.  That’s all it can be.  Unless the government makes it mandatory then they won’t do it.  Very short sited of them as I reckon these days that it is the opposite.  I reckon people would go to those shops because they don’t give away plastic bags.

I wonder when it will click with them?  Maybe soon, maybe never, who knows but the more pressure we put on, the better.