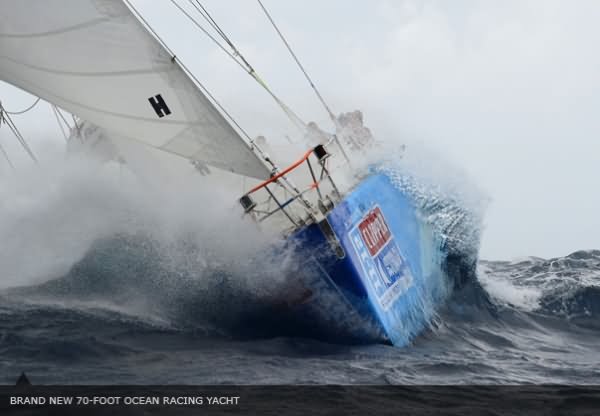 The Clipper Round the World Yacht Race is the only event of its type. Anyone, even if they have never stepped on a boat before, can join the adventure and circumnavigate the world in an eleven month-long marathon.

This is the only race in the world where the organisers supply the fleet of 12 identical, 70-foot, stripped down racing yachts – each sponsored by a city, a region or a country – and man each with a fully-qualified skipper, employed to lead the crews safely around the globe. It’s where taxi drivers rub shoulders with chief executives, vicars mix with housewives, students work alongside bankers, nurses work with vets and doctors team with rugby players. It’s an experience that will change people’s lives. Yet while the crews may be amateur, no one has told the ocean that.

The sea does not distinguish between Olympians or novices and if the Southern Ocean, the Pacific or the South Atlantic decides to throw down the gauntlet, the Clipper Race crews need to be ready to face exactly the same challenges as those experienced by the professional racer.

And, when they return from the biggest challenge they have ever faced, the crews bring home countless lessons with them. The importance of teamwork and the importance of respect. Of giving more than you take. Of learning what your body is capable of. An appreciation of cultures, religions, lifestyles and attitudes that connect with communities right around the globe. Created by Sir Robin Know Johnston, the first person to complete a solo non stop circumnavigation of the world, this is a race that takes people all over the world.  Ocean Crusaders founder Ian Thomson regards Sir Robin as the legend of the sport and one of his inspirations.  Ian met Sir Robin in Sydney before the 2010 Sydney to Hobart where Ian was signing copies of his book ‘Dare to Dream’ when Sir Robin walked past.  Jumping at the opportunity to say hello, Ian walked over and introduced himself.  Robin asked about the book and Ian quickly grabbed one and gave it to Sir Robin.  He asked for it to be signed.  Ian paused and later recalled ‘What do you write in a book about chasing your dreams, for a man who has chased every dream he has had….I wrote…. to someone who has chased his dreams and proven that when you do with all your heart, you can achieve anything.’

Ocean Crusaders will play a part in the 2013/14 Clipper.  Sean Manchester from Tiburon California contacted us about promoting our campaign whilst he sails in the event.  He is currently raising money and his hoping to achieve the goal of raising at least $1 per mile he will sail (5129).  Sean has chosen to raise money for Ocean Crusaders rather than raising money to compete in the entire event which would be his dream.  Instead he will just sail in one leg of the race so we will keep you up to date as to how he is going when the time comes.

Sean will also be keeping a blog at http://smanchester.com/  If you wish to support his campaign please contact him via his website http://www.manchesteroceanracing.com/.  We’d like to thank Sean for his amazing efforts and his committment to looking after the worlds oceans.  I’m sure in his sailing adventure he will experience the true essence of the ocean, the thing that makes it so special.  We hope the dolphins take Sean’s boat to victory in his leg. Ocean Crusaders may also have another entrant in the race.  Former team sailor Damian Parnham is in the final selection process to become one of the 12 skippers.  We hope Damian gets a spot as his dedication to Ocean Crusaders over the years has been epic as well.

Together these two will take Ocean Crusaders to new markets around the world, something we are continuing to push.  If you have an event that could promote Ocean Crusaders, please touch base with us as we are always keen to work with new groups.  The more people who learn of our campaign and how to look after the oceans the better.  Maybe it’s a yacht race, maybe it’s a beach clean up, maybe it’s just using our education program in your school.  Contact us for more information.