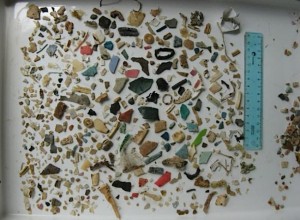 To date, 177 species of marine life have been shown to ingest plastics. It’s a funny number, because researchers speculate that the more they look for polymers in stomachs, the more they will find.  The Save The Bag Coalition will often say that they acknowledge that marine animals ingest plastic, but there exists no evidence that the plastic was the cause of the animal’s death. In a particularly coarse and cold post entitled, Trick Photography they make this point. Environmentalists are often called ‘bleeding hearts.’ But even strategically, from the opposition’s standpoint, is it really a good PR decision to defend the plastic bag by referencing a picture of a sea turtle with one sticking out of it’s mouth? I would love to hear if the person who wrote this had the guts to stand in front of a room full of fourth graders. I sure as hell wouldn’t.

Well, the attached picture is the stomach contents of a juvenile sea turtle accidentally caught off the coast of Argentina.  All types of plastic are present, including HDPE, the stuff most plastic bags are made of.

Determining death, or eventual death of an animal based on a necropsy (autopsy for animals) is notoriously difficult in some cases. What’s at issue is that industry takes advantage of the ‘unknowns’ to make the assertion that their products don’t cause morbidity of animals. Scientists don’t absolutely know what causes an animal’s death unless it lives and dies in a controlled environment where the vectors that effect its health can be controlled and monitored.  And don’t look for the American Chemistry Council to fund a study that feeds captive sea turtles a steady diet of plastic to sea if their products kill. No, they’re busy working on important studies that try to convince you that a reusable bag is dangerous instead. Here’s a call out. Save The Bag Coalition:  let’s have your staff eat the exact weight in plastic that this turtle did.  And then let’s talk about how you feel. Federally, we as nation care about sea turtles: they are protected under endangered species law.

BUT Does Plastic Kill?

How long would a turtle have survived with this much plastic garbage in his guts?  Well, we know that many types of plastic can’t be passed by turtles and that it wreaks havoc on their digestive systems. We also know that carrying around a stomach full of plastic is going to slow him down and change his natural buoyancy. Sharper plastics, such as the pieces 5 Gyres find photo-degraded in the gyres, cause gut impaction and the potential for stomach wall and intestinal perforation– I know the dangers personally, my dog, Porkchop, ate a squeaker from a dog toy he got ahold of that perforated his intestine.  Without surgery it would have killed him. In the wild, everything about an animal’s health and agility matters in determining her survival quotient.  Unlike humans, turtles don’t have the option of wheelchairs, air conditioning, and money to help augment their survivability. Every time a turtle eats plastic, her chances for survival diminish, because plastic inside the bodies creates a disadvantage for the animal in her ranking amongst ‘the survival of the fittest’. One thing we know for certain is this: turtles can’t digest plastic.

In December, a study was published in Science Of The Total Environment that looked at something interesting:  the researchers looked to see if the digestive juices of turtles could make plastic bags decay. Three common types of shopping bags were subjected to the gastrointestinal fluids (GIF) of Green and Loggerheads turtles.  One of the bags tested was a ‘biodegradable plastic bag.’ For 49 days the plastic marinated in the GIF and surprise, surprise, the degradation of standard poly bags was negligible. The biodegradable bag showed between three and nine percent degradation.  The 49 day number is important– this is the timeframe that biobag manufacturer stated was the time it takes a biobag to fully decompose in an industrial compost facility.

From the study’s abstract concerning degradation : This was a much slower rate than reported by the manufacturers in an industrial composting situation (100% in 49 days). The GIF of the herbivorous Green turtle showed an increased capacity to break down the biodegradable polymer relative to the carnivorous Loggerhead, but at a much lower rate than digestion of natural vegetative matter. While the breakdown rate of biodegradable polymers in the intestinal fluids of sea turtles is greater than standard and degradable plastics, it is proposed that this is not rapid enough to prevent morbidity. Further study is recommended to investigate the speed at which biodegradable polymers decompose outside of industrial composting situations, and their durability in marine and freshwater systems.

So, are biobags better? Three to nine percent better it appears, but like the recycling rates of plastic bags in general, not enough to make a difference worth talking about.  It seems the only option is compostable bags.

If you’re concerned about plastics in the ocean killing sea turtles, here’s something that will help: reduce your plastic footprint. Believe it or not, you do matter.