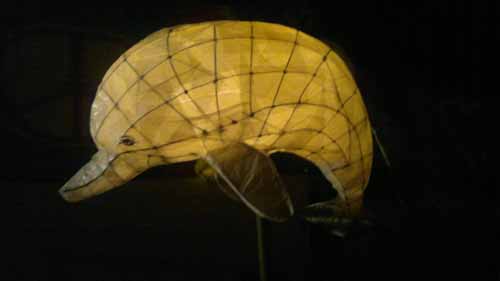 The sight of dolphins in the wild is something a lot of people pay good money to see but when I saw a dolphin in the bushland over the weekend, well let’s say I didn’t expect it but what a sight.

It is rare that I get away from the ocean but over the weekend a group of friends decided to go to a music festival between Airlie Beach and Mackay called Wintermoon.  Having never been before I had no idea what to expect but on arrival it was just a chilled out atmosphere with people just enjoying good music and each others company.

Through the day we walked through the stalls and listened to music.  After seeing the crew of a local yacht Surefoot compete in the finals of the song contest (they got runner up) it was off to one of the camps where the true bush camp atmosphere takes over.  Sitting around the campfire a couple of guitars and drums and you have a recipe for a good time.  30-40 people gathered around singing songs from old folk songs about drunken sailors to Creedence.  It was a fantastic time but after dinner the big stage was calling.

Everyone headed to the main stage to see the Bushwackers perform when out of my eye I caught site of the most majestic creature dancing through the sky.  It was a lantern in the shape of a dolphin.  I couldn’t help but go and take a photo as it had immediately given me memories of my encounters with dolphins in the wild.  I’m really annoyed with myself that I didn’t get the young girls name who created it, hopefully she will come on here one day and send me an e-mail. Some of the encounters I’ve had with dolphins have stuck in my mind forever.  The main one was when I was cruising between Curacao and Aruba off the north coast of Venezula.  I was on a 39ft yacht under spinakker, all alone on deck at around midnight with a full moon.  All of a sudden a splash, then another and another.  Before I knew it there were literally hundreds of what looked like spinner dolphins playing with the boat.  The jumped high in the air, walked on their tales and put on a performance that saw me smiling like a little kid.  It was amazing and something I will always remember.

Then just the other day I watched a video of a mate who had just won a leg in the Global Ocean Race on Cessna Citation.  In the video was footage of dolphins playing with the boat but most impressive, and as a sailor I know why, both of these guys were saying that one of the highlights of their leg win was earlier that day when the dolphins joined them.

It doesn’t matter how many times you see them, it is still special.  It is really important that we continue to look after our dolphins and keep them in the wild to play in the swells and with our boats.  Dolphins are not meant to be captive in small pools where they cannot chase boats or swim the 40km a day they usually do.

If you have seen them in the wild you will know what I mean.  Please help us by boycotting dolphin shows in captivity and also buying dolphin safe tuna.  Every little bit helps.