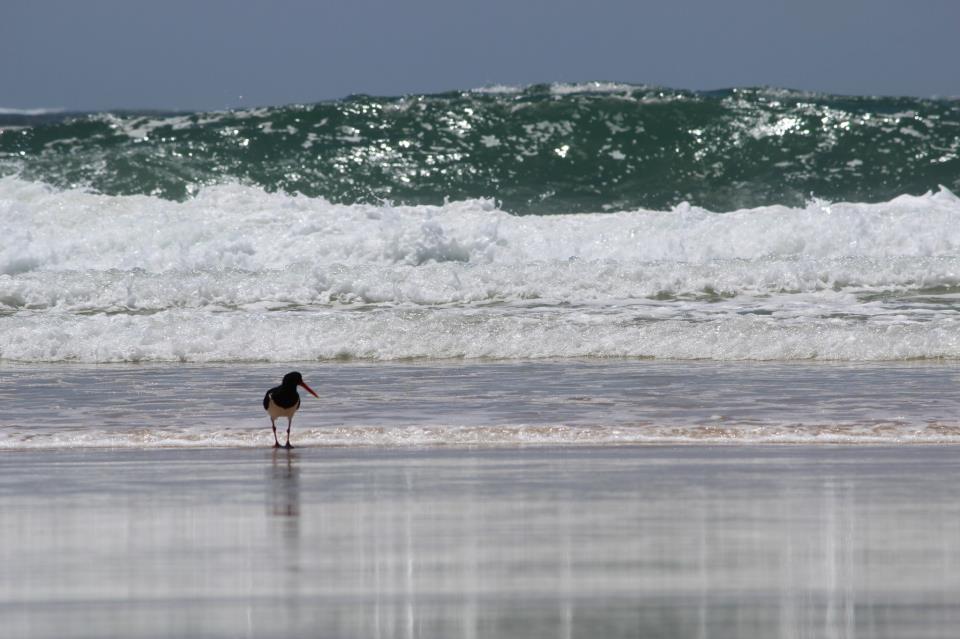 After the success of the inaugural Paddle Against Plastic mission from the Whitsundays to Mackay, a group of 4 visited Fraser Island.  We took a couple of the Naish Boards in the hope we could find a few cool spots to paddle.  What we found was nothing short of stunning, both in a good way and a bad way.

Annika and I flew from Airlie to Brisbane to meet up with some friends whilst Kath and Haydon drove down in the 4wd.  We met up Sunday afternoon at Inskip point, the point where you enter Fraser Island, a 123km long sand island off the coast of Queensland Australia.  It is mandatory you have a 4wd for this journey as a 2wd will get stuck, even the 4wd’s get stuck occasionally.

After a stunning sunset we set up camp on the foreshore before heading into the surf club at Rainbow Beach for a bite to eat.  Hearing the surf roll in all evening was awesome and the first chance of an open fire.

In the morning we caught the ferry across to Fraser where we started our journey up the inland track due to the high tide.  It was rough and dusty so we were glad to hit the beach where things smoothed out. Just past Eurong Resort we started looking for a campsite.  We drove in the first one and found a couple of good spots but decided to look in the next two.  Bad decision.  The very next one and it was really soft getting in.  As we drove in we also saw heaps of tents and it was a backpackers camp.  We did a circle and as we tried to drive out again we got bogged…..seriously bogged.  The bottom was sitting on the sand.  Haydon and I started the big dig and then tried again but only succeeded in burying it further.  Eventually another car came and we used it to pull us out.  We drove straight back into the first site and chose our spot.  We set up camp and then decided to move the car.  Nope she was bogged again.  As I dug out the front end I noticed the CV joint snapped in two…that would be the problem.  We were basically in a 2wd car.

Stuck on Fraser with a 2wd car, not a good thing.  How would we get it fixed.  We got to the local store and rang the local mechanic who was not helpful at all.  It was 4:15 in the afternoon and he said there was no hope to get parts and get it fixed by the end of the week.  Silly thing to say to me my friend.  When I’m challenged I will rise to the occasion and make things happen somehow, although I was doubting things a bit.  I rang Nissan in Hervey Bay and they said it would be 3 months and $1200.  They did however give me a number of the local Tyrepower and I rang them.  I got Les, the most helpful bloke I could have hoped for.  5 minutes later he rings me back and says he’ll have one first thing in the morning, call him at 0800.  So I did and he asked how I was getting it to the island.  He said he would  pick it up and drop it to the freight company that delivers daily to the island.  Stoked.  By 1315 the next day we were all fixed thanks to Haydon’s skills and the local tow truck guys tools. However the biggest shock was yet to come.  In the morning when Annika and I went for a walk, we were stunned by the thousands of pieces of plastic scattered along the high tide line.  The beach had become the east coast oceans dumping ground.  Everywhere you looked there was plastic.  Every wave bought in new plastic pieces.  Throughout the trip we found that it occurred all the way along the beach.  123kms of plastic debris….not thousands of pieces, millions, possibly hundreds of millions of pieces.  Our photos just don’t tell the story.  Bottles, thongs, bottle caps, it was everywhere.  It wasn’t just from people on the island, this was from the entire east coast of Australia.  Could it have come from the north with the east Australia current or from the south with the SE trade winds…who knows but it got there and it isn’t natural.

Throughout the trip we found some cool places to paddle including Eli Creek which was a tidal river running into the ocean, Lake Mackenzie and the Boomerang lakes.  Lake Mackenzie was stunning as the photos will show.  Crystal clear waters and flat with no wind.  We could have ventured into the surf but it had been blowing 50 knots for a day so we stayed out as it was looking horrible.

But even though the paddling was amazing and the 4 wheel driving was stunning through rain forests and sand dunes, the plastic debris on the main beach just kept screaming at me.  Why do we do things to such stunning places?  Well it’s because we don’t know and/or are too lazy.

Plastic convenience is killing our world.  Alternatives are there, we just have to use them.  What plastic are you using today and where will it be tomorrow and in 1 month and in 1 year and in 100 years.  It will still exist so please reduce the plastic you use, reuse it if you have to use some and recycle it when you are done.  There is no excuse anymore, we know where it goes.  change your habits today so save our oceans and environment tomorrow.