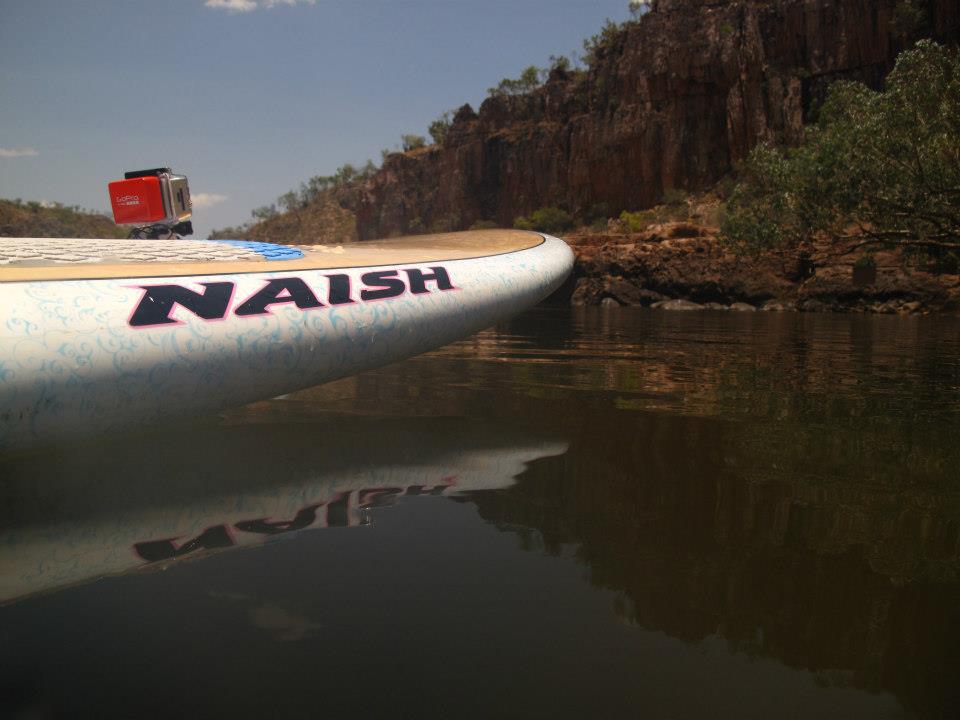 The first thing you think of when you consider paddling in the Northern Territory is the Crocodiles.  When I think back to a mate who kayaked from Cairns to Thursday Island in Queensland, he told me stories of crocs exploding out of the water next to him as they thought he was another croc.  With a bright yellow board, the thought crossed my mind however our destination was inland and at the end of dry season. Having left Airlie Beach in the van, it was two days of solid driving to get to our first destination.  I had been to Mataranka Thermal Springs when I was just 13 as my parents took the family around Australia.  I recalled the Oasis with warm clear waters surrounded by palm trees.  I couldn’t remember the size although I knew it was small. We arrived late at night so we went for a quick swim that evening and it was stunning sitting in the water staring at the stars through the palm trees.  However the morning was what we were waiting for.  Whilst having breakfast, we were joined by a couple of local kangaroos.  We couldn’t resist the temptation of trying to get one on a board so with a little bit of luring in, one of them actually got on Annika’s board.  Classic photos.

After breakfast we carried the boards down to the pool and had it to ourselves for about 30 minutes.  Using the time to take a few photos, the clear waters really were special.  Then a family turned up with three kids so we gave them a quick paddle on the boards and they loved it.  They had never paddled before and to SUP for the first time in the thermal springs would have been pretty amazing.  As the daily crowds started arriving we headed for the nearby river for a quick paddle before packing the boards up for our ultimate destination, Katherine River Gorge. After an hours drive up the road, we arrived at Katherine and set up camp.  We then went and applied for our permit.  All water craft on the gorge system have to get a permit and return it on time to ensure that the rangers don’t come after you if you are late.  After a night’s rest we rose early as neither of us could sleep.  The anticipation of paddling through towering cliffs was too much.  We hit the water just before 7 and the morning light on the water was breathtaking.  Not a breath of wind and we were off.  The first gorge was 2km long and as we wound our way along the gorge we found ourselves taking so many photos and taking plenty of video.  It was stunning.  The cliffs varying colors and the sandy beaches were just awesome.  Most beaches we couldn’t go on as they had signs stating it was a crocodile breeding area.  Only fresh water crocs though and they are not aggressive.  I was pretty keen to see one but Annika was happy not to see any. At the end of the first gorge we had to carry our boards about 200m across the rocks.  A nice pathway was built, although the short section of grating was hard on the feet.  Launching into the 2nd gorge, I knew this was the gorge that makes Katherine Gorge world famous.  As we set off our pace continued to drop.  We were both in awe at what we were seeing.  The cliffs in the 2nd gorge tower up either side of you about 70-100m at a guess.  As I write this the memories are flooding back and I can’t find the words to describe what we were feeling.  I recall saying the word ‘Stunning’ so many times.  ‘Magical’ also comes to mind.

You could paddle right up against the cliffs and with them towering above you, it is simply amazing and unique.  There were even a few shallow caves to paddle into.  We couldn’t resist a swim here and there.  The water was so clear and still, you couldn’t ask for more.  After two more kilometers of paddling in awe we eventually came to the end of the 2nd gorge.  The passage to the 3rd gorge is only 50 meters and the third gorge is different again.  It is only short and at the end is a huge pile of rocks.  We parked the boards up and walked on the rocks for a bit and found a cool little swimming hole. There are actually 13 gorges but the walk between 3 & 4 is 40 minutes so we opted not to go that far.  We were happy anyway with what we had seen and the best part, we had to paddle back down the gorges to get home.  On the way home the pace was nothing more than leisurely.  We stopped in caves, we swam, we jumped off cliff faces, we just had an amazing time.

We spent 7 hours on the water in all.  It was one of the most memorable days of my life.  In fact I would challenge someone to find a better place to paddle.  I know it is a long way from anywhere but it is so unique and special that you should really consider this as a trip to make.  Maybe you don’t want to bring a full size board so consider the Naish Air series.  That way you can throw it on the plane.  It’s only 4 hours drive south of Darwin and Mataranka is another hour.  Dry season is the only time to be here.  We were pretty late being the end of October but it was still good.  Soon it will be wet season and the gorge will be closed as the waters rush down the gorges along with a new influx of crocs!!!! The best part of this whole experience is that there was no plastic to be seen anywhere.  We found one cigarette lighter on a rock which someone has accidentally forgotten.  It is now lighting our camp stove.  Maybe the fact that the Northern Territory has a plastic bag ban is the reason.  They also have a container deposit scheme where you can take your cans, bottles and plastic bottles back to a recycling center and get 10 cents back.  It obviously works as the Northern Territory is much cleaner along the roads than Queensland and NSW.  So if it works here and in South Australia, let’s hope that soon the other states and territories follow suit.

If you are considering a magical holiday, something different and something unique, then consider a trip to the Northern Territory.  It will be something to remember, I guarantee it.