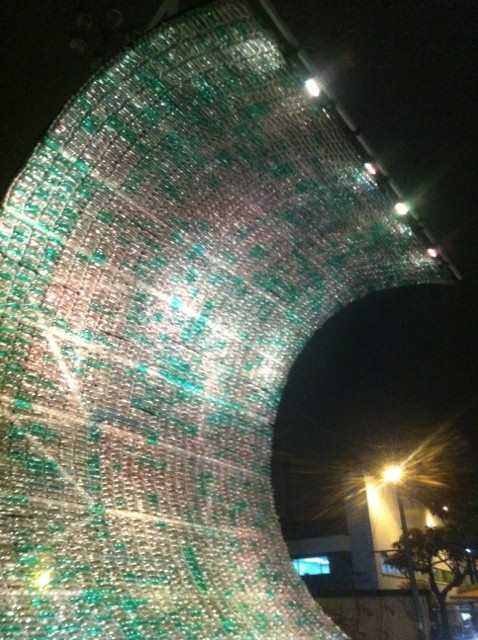 La Ola, “The Wave”, is a public art installation project that stands 9 meters high in the center of San Jose, Costa Rica.

To fill The Wave, 6,000 plastic bottles were braided to get a texture that simulates a colossal plastic wave suffocating the city with its toxic components.

According to the most optimistic projections, about 20 ‘Olas’ of these 276 million bottles may get collected and recycled – but the actual number is likely less. Over one hundred ‘Olas’ of plastic bottles get simply discarded each day.

Just imagine that: more than one hundred of these waves of plastic consumed each day.

It is indeed a plastic tsunami, covering everything in its path.

The mayor of San Jose, Johnny Araya Monge, and Daniella Russo, Executive Director of Plastic Pollution Coalition, inaugurated the monument to serve as a statement against plastic pollution.

The opening of this structure was covered by local media, as well as CNN. PPC members from Costa Rica, Nicaragua, and Guatemala including Preserve Planet and Playa Botella were present and participating, as were several schools from the San Jose area.