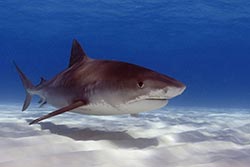 MIAMI — Nov. 17, 2011 — The Florida Fish and Wildlife Conservation Commission (FWC) approved a measure to protect tiger sharks and three species of hammerheads from being fished out of state waters.

“I commend the Commission for taking this significant step to protect these sharks before it’s too late,” said Dr. Neil Hammerschlag, director of the RJ Dunlap Marine    Conservation Program at the University of Miami (UM).  “It’s my hope that the National Marine Fisheries Service will follow Florida’s lead and ban these sharks from being harvested in the adjacent federal waters.”

Hammerschlag, an assistant professor at the UM Rosenstiel Marine School of Marine and Atmospheric Science and Abess Center for Ecosystem Science & Policy (ACESP), uses satellite tags to track large and environmentally threatened sharks in Florida and Bahamas, including great hammerhead, bull and tiger sharks. His research focuses on identifying hotspots, areas that are important for feeding, mating, and pupping, and to document their largely unknown migration routes.

Sharks are highly threatened worldwide due to overfishing, a trend that is largely driven to fuel the shark fin trade as well as from accidental bycatch from commercial fishing operations. Populations for hammerhead sharks in the northwest Atlantic have declined more than 80 percent over the last two decades.

DNA analysis of great hammerhead fins sold in the Asian shark fin market has shown that a large majority of the sharks came from Atlantic waters. The great hammerhead shark is listed as endangered in the northwest Atlantic and Gulf of Mexico by the International Union for Conservation of Nature (ICUN) due to a 50 percent population decline.

“This ban is not just helping Florida but it’s mutually beneficial for the greater Caribbean and rest of the southeast Atlantic,” said ACESP graduate student Austin    Gallagher. A recent study by Gallagher and Hammerschlag on shark eco-tourism operations worldwide used socio-economic data to show that sharks are worth significantly more alive than dead. This study was presented to the FWC at a recent meeting.

Research shows that Florida waters are important pupping and feeding grounds for sharks, providing them with the critical habitat required for these slow-to-mature ocean animals to survive.

This move to fully protect tiger and hammerhead sharks in Florida waters was spearheaded by public action, bringing together scientists, fisherman, divers and concerned citizens to testify in support of the ban at numerous FWC hearings over the last year.

The new measures, which goes into effective Jan. 1, 2012, prohibits the harvest, possession, sale and exchange of tiger sharks and great, scalloped and smooth hammerhead sharks harvested from state waters.

“This law demonstrates that the state is committed to protecting its rich ocean biodiversity,” said Gallagher.  “It’s a shining example of shark conservation for the rest of the U.S.”

About UM and the R.J. Dunlap Marine Conservation    Program The University of Miami (UM) is the largest private research    institution in the southeastern United States. The    University’s mission is to provide quality education,    attract and retain outstanding students, support the faculty    and their research, and build an endowment for University    initiatives. Founded in 2009, the R.J. Dunlap Marine    Conservation Program is a joint program of the Rosenstiel    School of Marine & Atmospheric Science and the Leonard and    Jayne Abess Center for Ecosystem Science and Policy. The    Rosenstiel School offers one of largest, most comprehensive    marine and atmospheric programs in the nation. The Abess Center    encourages innovative interdisciplinary initiatives that bridge    the gap between hard science and environmental policy. For more    information, please visit www.rjd.miami.edu.