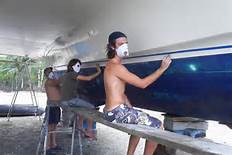 If you ever feel irritated by the fact that your anti-fouling doesn’t work like it used to, be reassured by how much you are helping sealife to survive. In San Diego, California, new studies have found that using non-toxic bottom paint is actually having a marked effect – more than anticipated – on the sealife of the area.

Two new studies focusing on San Diego Bay’s 2,200-slip Shelter Island Yacht Basin show decreasing levels of dissolved copper in the water, compared to previous studies — and they find levels that are not toxic to most of the area’s marine life.

The news from the two studies completed in March brought both a sigh of relief to area boaters and a signal of caution about current moves the Port of San Diego is making to reduce the amount of dissolved copper in Shelter Island Yacht Basin.

The situation boaters in one of San Diego’s largest recreational marinas find themselves in today began when water testing found elevated levels of dissolved copper in many harbors in California.

‘It (copper) can be especially harmful to species on the bottom of the food chain and the early life stages of fish, bivalves and echinoderms,’ said Jeremy Haas, Environmental Program manager for San Diego’s Regional Water Quality Board. ‘The toxicity is affected by several factors, including the form of the copper, its availability and the varying tolerance of aquatic species. Some of our native aquatic species are very sensitive to copper, while others are more tolerant.’ In 1996, the San Diego Regional Water Quality Control Board determined that 95 percent of the copper found off Shelter Island came from the sloughing of copper-based boat bottom paints in the basin. Copper, a common ingredient in antifouling boat paint, was said to be toxic to marine life in the surrounding area. The water quality board issued a Total Maximum Daily Load (TMDL) for Shelter Island Yacht Basin, meaning limits had been placed on the amount of dissolved copper allowed in the basin at any given time.

Since then, the Port of San Diego has been working to minimize the amount of dissolved copper in the waterway by implementing Best Management Practices for hull cleaning companies, focusing on reducing the amount of copper released into the water and grant programs to give boaters incentives to replace their copper-based hull paints with non-biocide hull paints.

The TMDL order from the regional water board stated that there must be a reduction in the amount of dissolved copper in Shelter Island Yacht Basin of 10 percent by the end of 2012, 40 percent by 2017 and 74 percent by 2022.

The first study was prepared by Weston Solutions and the Port of San Diego for the Regional Water Quality Control Board as part of the first progress report, to determine whether the basin was coming closer to meeting the 10 percent reduction rate required by the end of this year.
The findings showed a 27 percent reduction in annual dissolved copper loading from boats in Shelter Island Yacht Basin and a 15 percent reduction in the annual dissolved copper concentrations in the basin, surpassing the 10 percent milestone that the basin was required to meet by the end of next year. To read the rest of the very detailed article, click here, but it’s good to know that these efforts required of sailing boat owners in most sailing nations of the world really do work.